Serena Williams was forced to pull out of the French Open on Monday after suffering a pectoral injury. And on Tuesday, the 36-year-old tennis superstar said on social media that she was having an MRI.

Welcomed by various individuals upon her arrival at the hospital, Serena seemed calm and collected with her braids pulled back into a bun. She kept warm in a black sweatshirt.

The 23-time Grand Slam champion donned black leggings that she pulled up to the bottom of her knees and smiled after exiting a van.

It was all about comfort for the Uggs-wearing mother-of-one who withdrew shortly before her highly-anticipated fourth-round match against Maria Sharapova due to a pectoral injury.

Taking to her Instagram page on Tuesday, Serena shared her ‘super exciting’ news.

‘Today has been interesting already,’ she said on her social media site. ‘I have just finished one exam with one doctor and the news is actually super exciting so I’m really happy about that.

‘I’m having an MRI soon, but I wanted to keep you guys totally updated,’ she continued. ‘Thanks for the support, the love and the understanding.’

Adding, ‘It’s been incredibly frustrating, but also I’m excited because I feel I’ve been playing really well and I could only go up and I’m looking forward to going up.

‘Hopefully you guys will be there to continue to cheer me on.’ 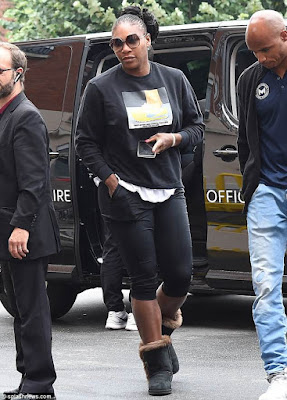 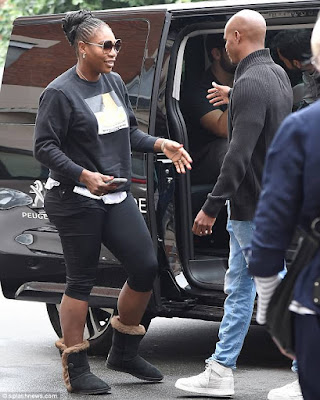 “A Real One For Life” – Regina Daniels Praises Ex Boyfriend,...

Elvis - December 3, 2020 0
Nollywood actress and billionaire wife, Regina Daniels has shown gratitude to her ex boyfriend, Somadina for being a “real one”. The mother of one took...

I Married Regina In 3 weeks, She Jmnows I’ll Marry Again...

Reno Omokri Replies Man Who Insinuated That There Are No More...

Burna Boy Reacts Amidst Cheating Rumour With A “bootylicious” Side Chic

Duncan Mighty Exposes Wife, Vivien For Allegedly Plotting With Her Mother And Family To...

“Erica Met Davido But Davido No Send Am” – Nigerians Drag Erica After Davido...

“Wahala for who get fame And No Money” – Kaisha Throws Shade

Nengi Thanks Davido For Featuring Her In His New Music Video

Elvis - December 3, 2020
We provide you with the latest breaking news and videos straight from the entertainment industry.
Contact us: [email protected]